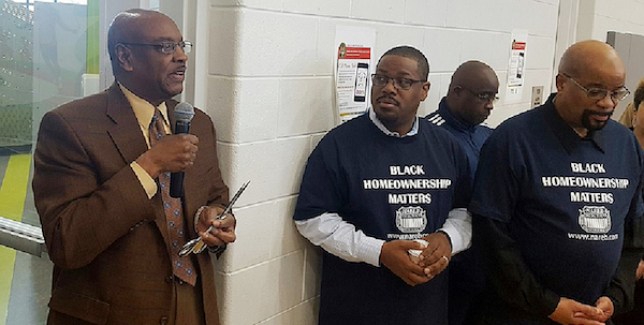 The best way for blacks to build wealth starts with homeownership.

That’s the message the National Association of Real Estate Brokers (NAREB) ingrained in the minds of more than two dozen people Saturday, April 8 at the Southern Regional Technology and Recreation Complex in Fort Washington.

The Lanham outfit held its annual mid-winter conference last week at National Harbor, but conducted the free community event Saturday to educate residents on the proper steps to homeownership.

“This is a marathon, not a race,” said Ceron Pugh Sr., president of the Prince George’s County chapter of NAREB. “We want you in the long haul … to buy a home and establish wealth.”

Pugh reviewed what lenders look for from prospective homebuyers, including job stability, income and having a savings plan.

Each person received a “home buyers workshop” document that briefly reviews each topic. It also mentions the most important part of the home-buying process rests with credit.

Three credit bureaus — Equifax, Experian and TransUnion — are what lenders use to pull a person’s credit history. Without one, most financial institutions will not provide a person with a loan.

Pugh said when applying for a loan and working with a lender, tell your financial history because it will be eventually found when a credit report is checked.

For those with limited or no credit, www.bankrate.com suggests building a good credit history it by obtaining a secured credit card that requires a security deposit and acts like collateral. Another idea is to co-sign for a vehicle, or something of substance, with a friend or family member.

“These lenders look to credit to see where you’re going,” he said. “It you don’t pay anything, then you won’t get anything.”

Several attendees understood some of the terminology from the housing experts, but Tonyia Minnis didn’t realize each lender has its own formula on how much a person must provide for a down payment. Minnis and her husband, David, rent an apartment in Suitland.

“[Lenders] don’t have a standard formula they go by,” she said while standing next to her husband and their 1-year-old granddaughter. “It’s like you’ve got to shop around and look for what you want to give you the best loan you can handle. That’s why we are here to learn about the process.”

After the presentation, attendees could speak with mortgage lenders, housing counselors and even receive a free credit report and an analysis of it.

Nadine Hackett of Fort Washington expressed interest in a loan program from Bank of America where a first-time homebuyer could get approved for a fixed-rate as low as 3 percent with no mortgage insurance required. However, the loan must be for at least 25 years.

Hackett attended to get information for her daughter, Shayla, who had to work Saturday.

“She’s about to graduate from Bowie State University in December, so she can look over this information later,” she said. “I want her to experience being a homeowner.”

The county was one of the hardest-hit jurisdictions in the nation when the housing crisis hit nearly 10 years ago and thousands of people lost their homes after going underwater, or when the homeowner owes more than what the house is worth.

The county also had foreclosed homes and ranked in the top five for several years in the state of Maryland, according to realytrac.com, which keeps track of foreclosed properties. The company had Prince George’s with the sixth-highest foreclosure rate in the state with one in every 585 units in February. Plaukų šalinimas lazeriu, mezoterapija, PRP plazmo liftingas ir lpg masažas Vilniuje https://oblakasalon.lt/our-services/figuros-koregavimas/lpg

Even though companies such as Bank of America, which completed a $7 billion consumer relief settlement with the Justice Department last month, prospective homebuyers should still have faith in the process, said Ron Cooper, president of NAREB.

“Some of these companies have tarnished relationships in our communities, but that should not stop us from the aspirations of homeownership,” said Cooper, adding that the application rate for blacks is down 30 percent. “If this lender isn’t the one, then you go with another one. We have to change the narrative in our community that homeownership is … the way to build wealth.”