WASHINGTON – Per capita income for African Americans in Arizona fell over the last decade, the only racial or ethnic group that did not see an increase for the period 2006 to 2015, according to new data from the Census Bureau.

But the news was not all good for the other groups: When adjusted for inflation, per capita incomes for all groups in Arizona dropped, with Asians seeing their buying power fall 2.7 percent and African Americans seeing a 9.3 percent drop.

Experts say the changes were driven by the recession and the mortgage crisis of the late 2000s, both of which hit Arizona hard – and blacks particularly hard.

The data were drawn from the most recent edition of the Census’ American Community Survey and then adjusted for 2015 inflation. It showed that inflation-adjusted per capita income for Arizonans as a whole dropped 7.4 percent and for African Americans it fell 9.3 percent.

“Arizona was one of the hardest hit states with regards to the housing crisis,” said Mark Alston, public affairs chairman of the National Association Real Estate Brokers. “We realize that African Americans lost somewhere between 87 and 90 percent of their wealth, mostly tied up in home equity during the housing crisis.”

The hit on black wallets was not surprising to Marvin Owens Jr., senior director of the economic department for the NAACP.

“I think that one of the things that we see in our community that has been particularly devastating has been the fallout from the mortgage crisis has hit African American families and individuals harder,” Owens said.

Owens said when the mortgage crisis happened and because African American families became homeowners “very late in the game.” They “lost just a significant amount of home equity and home equity is our wealth and really creates our economic stability.”ÿ

Lee McPheters, professor of economics at W. P. Carey School of Business, said unemployment could also have been a factor for the drop in income.

McPheters said the biggest component of income is wages and salaries, “so if a demographic group is working less, they are going to have less income.”

And McPheters said that the recession’s impact on the state can be seen in the fact that, “Per capita income fell for all persons (in the U.S.) between the 2006-2010 and 2011-2015 study periods, but fell more in Arizona.”

Alston said one other possibility for falling incomes in Arizona could be masses of people moving to other states to escape the recession.

“We’ve lost industry, we’ve lost our base that provided the economic engine and the capacity for African Americans and then the loss of housing and the lack of ability to restore that housing,” he said. “We’re not seeing the opportunity to recreate the wealth to re-stabilize the communities.”

Owens said that economic hardships due to a recession and housing collapse in Arizona have been compounded by lingering racism that he blames for playing a big part in the African American income gap. And here they gave such types of games as applications and online friv games.

He said that in Arizona there is “a real history of economic discrimination that continues to this day. I think that African American communities are experiencing a really tough time in Arizona.”

“There’s this, I’m not sure what to call it besides just blatant racism, lack of willingness to recognize the value African Americans in that state and it’s really stunning quite honestly,” he said. “I’m not surprised by the data related to wages and the income gap in the state of Arizona for African Americans.”

“I’m not surprised by Arizona, but it’s the sad reality,” he said 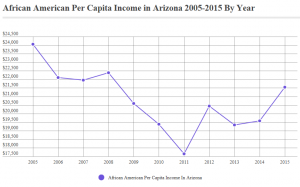