Coronavirus Could Be New Housing Crisis for Communities of Color

Alex De La Campa’s parents still haven’t recovered from a 2008 foreclosure and he fears the coronavirus-induced economic collapse will leave them in an even deeper hole.

Prior to the last recession, they owned their home in Concord, Calif., a Bay Area city of 120,000 people where his father, a Mexican immigrant, was a police officer. Eventually, they found an affordable rental home that they sublet to make ends meet.

Now, their tenants are falling behind on their rent and De La Campa, a 31-year-old Navy veteran who has since graduated from college, is worried about whether he can continue sending money each month to keep them in their home.

“I felt like my military experience and my efforts in school had given me what I needed to catch up,” he said. “Since Covid, everything has been put on hold.”

The coronavirus pandemic has shattered the U.S. economy, but its effects are most acute on African-American, Latino and immigrant communities, driving down home-ownership rates even further, and worsening wealth inequality, say housing advocates. Housing is one of the key ways that families can build generational wealth that can be passed between generations and provide a buffer against financial shocks.

“Home ownership is how we build wealth,” said Yoselin Genao Estrella, the executive director of the Neighborhood Housing Services of Queens CDC Inc.

African-American and Latino communities were hammered by high foreclosure rates when the housing bubble burst in 2008, losing levels of wealth that far outpaced white communities. The Center for Responsible Lending says that black and Latino households lost as much as $1 trillion.

A 2013 study from the National Association of Real Estate Brokers, an industry group for black real estate professionals, found that 8% of African-American and Hispanic borrowers were foreclosure victims during the financial crisis, nearly double the rate for non-Hispanic white borrowers in the same period. 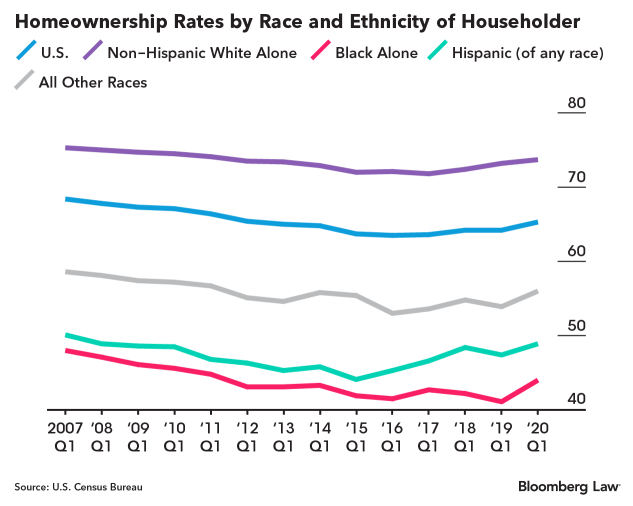 African Americans and Latinos account for far higher proportions of Covid-19 infections than their share of the overall U.S. population. They have lost jobs due to the pandemic’s economic fallout at a higher clip than whites as well, according to government statistics.

African-Americans and Latinos that are still working tend to be in fields deemed essential, like health care and food service, putting them at even higher infection rates.

‘Epicenter of the Epicenter’

These dynamics are playing out starkly in New York City. Elmhurst and Corona, two Queens neighborhoods with largely African-American and Latino populations, have significantly higher infection rates than Manhattan’s Upper East Side, which is wealthier and whiter.

Elmhurst is also home to Elmhurst Hospital, a city-run facility that has seen staggering numbers of Covid-19-infected patients and deaths, making it the “epicenter of the epicenter.”

The neighborhood has also seen high levels of job loss alongside the higher infection rates, which is making an unsettled housing environment even shakier, Genao Estrella said.

Citywide, only 27% of blacks and 17% of Hispanics owned their homes, according to New York University’s Furman Center for Real Estate and Urban Policy.

Many of the primarily African-American and Latino homeowners in the neighborhoods where Genao Estrella works are also small landlords, offering more affordable rental rates, she said.

As job losses mount, and renters aren’t able to pay, there is a danger that a second foreclosure wave could hit, she said.

“If one of their tenants lost their job, it’s going to have ramifications immediately,” Genao Estrella said.

Queens, particularly African-American and Latino neighborhoods, was hardest among New York City’s boroughs during the financial crisis. Home owners became renters. If they lose their rental homes in this crisis, there are questions about what will happen next.

The situation is playing out across the country.

Little Rock, Ark., saw around two-thirds of its affordable housing stock disappear after the housing bubble burst in 2008, according to Martie North, the president of the Arkansas Coalition of Housing and Neighborhood Growth and Empowerment’s board of directors.

The slowdown in economic activity is likely to make the housing situation worse for both owners and renters, North, who is also the Community Reinvestment Act director at Simmons Bank, said.

In Santa Ana, Calif., Isabelle Lopez, 55, lost her sister and her mother-in-law to coronavirus, and now she’s worried about losing her home.

Lopez, 55, receives $1,043 per month in Medicare disability payments. Her husband, a Mexican immigrant who has lived legally in the U.S. for 25 years, lost his job as the California economy shut down to combat Covid-19. His work authorization has since expired, and he hasn’t been able to renew it because the local immigration office is closed.

Lopez and her husband have been homeless before, a result of displacements from the 2008 financial crisis. And she fears that could happen again.

“We’re already in crisis and then this came around. And we’re like walking zombies,” Lopez said in an interview with Bloomberg Law. “We don’t know whether to pay rent, to eat or go homeless.”