Tamairo Moutry, a successful entrepreneur and real estate mastermind, has opened three real estate companies in less than 5 years, and is opening her next one in Illinois before the end of this year. She was a guest speaker on the Independent Real Estate Broker panel at this year’s NAREB national convention. 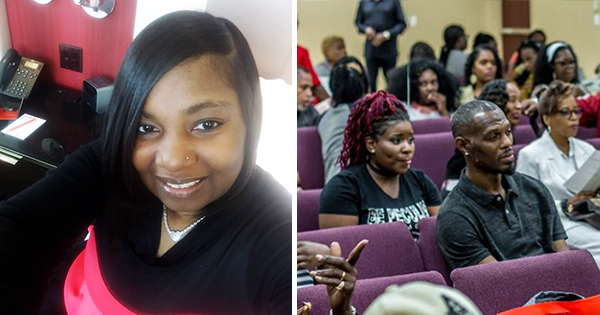 Tamairo recently attended the NAREB national convention, held in Atlantic City, New Jersey, where she was a featured guest speaker on the Independent Real Estate Broker panel. She literally blew the audience away with the valuable knowledge that she shared. As a humble entrepreneur, she also took advantage of the event’s powerful networking opportunities, and attended many educational meetings and training workshops. One specific and very important training that Tamairo attended was the Faith Based Certification Training: Engaging the Black Church workshop.

Since being featured on BlackNews.com earlier this year, Tamairo has received several business opportunities. She has also received more clients, and agents joining her real estate firms in the 3 states that she’s currently licensed in. Most recently, Tamairo was a guest speaker on July 13th in Atlanta for a non-profit organization called All Women S.H.I.N.E. She even started a real estate radio show in Atlanta called “Let’s Talk Real Estate” earlier this year.

Unfortunately, Tamairo was unable to continue the show due to her busy work schedule. Tamairo is now working on a new real estate magazine. She was the Keynote Speaker for a 1st Annual Real Estate Women’s Retreat on April 29, 2019 in Port St. Lucie, Florida. The group owner, Ella Blaine of the popular Facebook Group called, Real Estate Ladies Rock reached out to Tamairo, after she saw the press release. Ella asked Tamairo to come and speak to many women Real Estate Agents who came from several states to learn, and to share ideas. The event was held to help Agents with marketing ideas, and to create their own opportunities. Tamairo met an Agent, Wyevetra Jordan at the retreat. Wyevetra Jordan was so moved by Tamairo’s speech, that within just this past week, Wyevetra has asked Tamairo to come and speak to her team in Washington DC.

Tamairo’s next keynote speaking event will be held with Wyevetra in Washington DC. between October and November of 2019. People from several different states have been offering Tamairo even more speaking engagements. Tamairo will be featured on an upcoming TV show called Who’s Got Curves? which will be filmed in Atlanta at the beginning of September 2019. This show will put the focus on plus sized women. On one of the episodes, the women will be competing to be the brand ambassador for one of Tamairo’s real estate firms, Georgia’s Best Real Estate Services. Let’s watch for that! She has been in talks to be filmed on HGTV, for House Hunters. However, again, Tamairo has said that she will reach back out to them when she can make the time to film and appear on the show.