Analysis: Five things Corporate America can do besides tweeting to combat racism

New York (CNN Business)Major companies have expressed solidarity with the collective plight of African Americans this week following the horrifying murder by police of George Floyd a week ago and the national chaos that has erupted in its wake.

For many black Americans, however, the corporate tweets, executive memos and statements on combating racism ring hollow from companies that too often have baked systemic racism into their business practices.
Tweeting support for black people’s rights is a nice gesture, but there are much more effective actions companies serious about this fight can take.
Here are five: 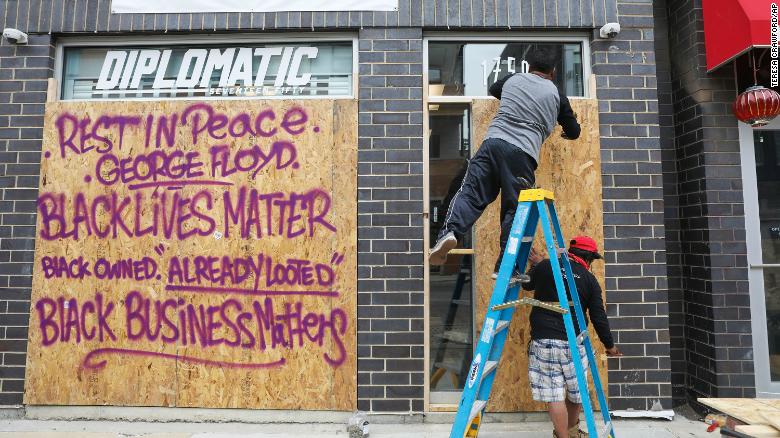 Diplomatic 1750, a Chicago sneaker and streetwear consignment boutique owned by Brian Heath, who is black.
Many black business owners are in dire need of bailouts right now.
Coronavirus shutdowns and social-distancing mandates have devastated black entrepreneurs across the country. Black businesses that were set on fire and destroyed during riots in the last few days have made matters even worse for some.
A recent study commissioned by the social justice advocacy group Color of Change found 39% of black American entrepreneurs believe their businesses won’t survive more than six months without some type of relief funding.
Black business owners have struggled to get approved for Paycheck Protection Program loans administered through larger commercial banks. Business leaders like Magic Johnson and Sean “Diddy” Combs have pledged financial and administrative support to help ensure a generation of black-owned barbershops, beauty salons, service providers and restaurants doesn’t disappear.
Combs recently partnered with the National Bankers Association, a coalition of 22 minority-owned financial lenders, to create his Our Fair Share program to help black business owners navigate the PPP application process.
NBA board chairman Kenneth Kelly says corporations that want to help black businesses should consider adding them to company supply chains or working with minority-owned banking institutions like the ones he supports, which have a better track record of financing minority clients.
“We have a higher affinity for looking at the totality of that customer as opposed to just numbers on a piece of paper,” Kelly told CNN Business. 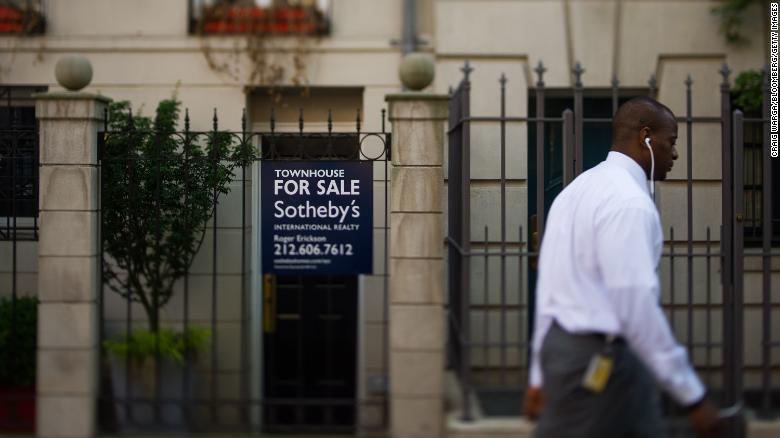 Corporations that want to help narrow the racial wealth gap between black and white America should consider donating to the National Association of Real Estate Brokers. The trade group’s realtors specialize in helping African Americans purchase properties, selling 20,000 homes to black purchasers in 2019 alone, a spokesperson said.
NAREB President Donnell Williams said companies that want to end systemic racism should consider contributing to NAREB’s “House Then The Car” program targeting black Millennials whose economic struggles and consumer behavior changes have fueled a record decline in black homeownership.
The homeownership rate for black young adults plummeted from 23.1% in 2000 to just 13.4% in 2015, according to an Urban Institute study. A 2019 analysis by the Center for Responsible Lending consumer advocacy group found black Millennials carry more student loan debt on average than their white counterparts and were also disproportionately hurt by the Great Recession of 2008. Additionally, NAREB says many black Millennials who can afford to buy homes choose not to although it’s an essential part of generational wealth building for most Americans.
“There are 1.7 million Black Millennials in the US who earn more than $100,000 per year who are not homeowners,” Williams told CNN Business via email. 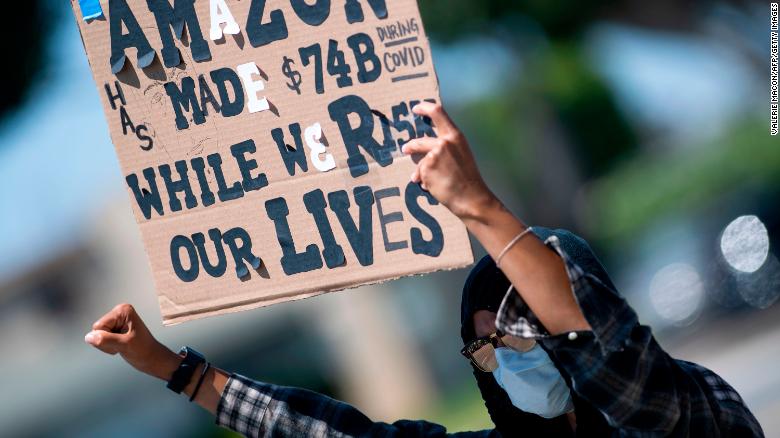 Organized labor advocates say companies that want to end institutional racism can start by supporting black workers who want to form unions and increase union rights.
Black Americans make up a disproportionate amount of workers in non-unionized business sectors like the home health aid and fast food industries.
African Americans are 13.4% of the US population but they also make up 26.5% of the workforce at Amazon, which does not have a union. 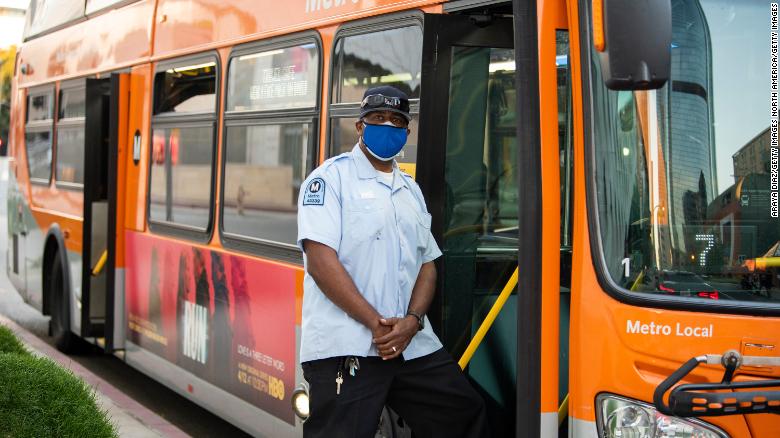 If essential workers are so … essential, then why aren’t they paid more?
Black Americans make up 17% of America’s essential workforce, according to a Center for Economic Policy Research report released in April. The national average salary for essential workers is about $32,000, roughly 18% lower than the average salary for all occupations, according to a recent Business.org study. Roughly 19% of African Americans live near or below the poverty line, according to the latest available US Census data.
Companies like Kroger, Target and Amazon recently have weighed rescinding their temporary “hero pay” wage increases for frontline employees even though the coronavirus pandemic is still ongoing. Henry says these companies should make their Covid-19 pay raises permanent if they want to help more black Americans.
“Permanent hazard pay is a good first step to achieving policies that will ensure corporations support the communities they operate in, “she said. 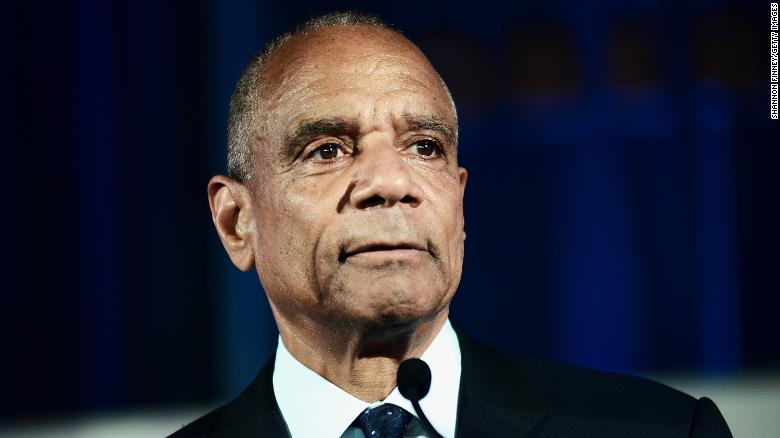 Former American Express CEO Ken Chenault
Top companies need to do a better job of recruiting and retaining black leaders. A recently published Stanford Graduate School of Business report on C-suite diversity at Fortune 100 companies found black professionals made up just 3% of the CEOs, 1% of the CFOs and 3% of the division leaders in 2020.
There are just four black Fortune 500 CEOs. In 2018, black professionals made up just 3.3% of all executive or senior leadership roles within two reporting levels according to the US Equal Employment Opportunity Commission.
Hiring more black executives is crucial for companies that want their leaders to better reflect the communities they serve. Black leaders also serve as aspirational figures for the generations that follow in their footsteps.
Former EEOC chair Cari Dominguez told CNN Business corporate leaders must add more black Americans to their executive talent pipelines.
“I see companies asking for a diverse slate of candidates — but not saying [what percent] should be made up of people of color,” Dominguez said.
Kelly, the National Bankers Association board chairman, said companies sincere about combating systemic racism must make commitments that persist even when the issue is not national news.
“It must be a value system that they embody and not a temporary item that they use to check a box,” he said.