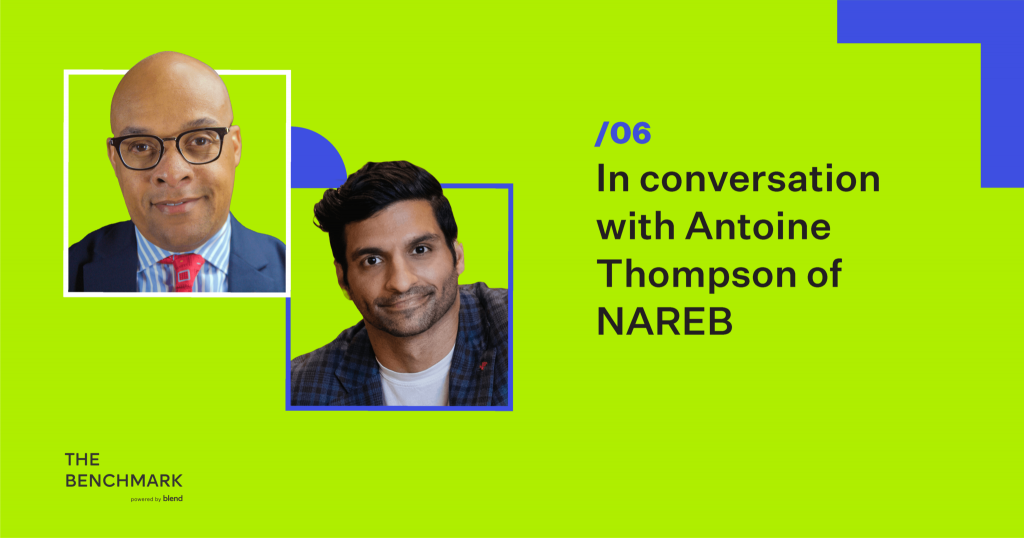 For this episode, Blend CEO and co-founder Nima Ghamsari met with Antoine Thompson, executive director of the National Association of Real Estate Brokers (NAREB), the largest and oldest organization of Black real estate professionals in America.

The two had a wide-ranging discussion: how to narrow and eliminate the nearly 30% gap between Black and white homeownership in America and how technology can help promote a more equitable ecosystem. They also dispelled some common myths about financial eligibility for buying a home and discussed how technology can help reduce the cost of homeownership.

Explore three takeaways from the video

NAREB was founded in 1947, just a few years after U.S. soldiers returned from the battlefields of World War II to restart their lives in America.

“Our soldiers were coming home and there were government benefits available to them,” explained Antoine. “One was to go to college and the other was the ability to purchase a home with no money down. Unfortunately, that program was not available to African Americans.” That was due to racial disparities in the implementation of the federal legislation, segregated neighborhoods in many parts of the country, redlining by lenders, and other discriminatory practices.

“But there are 2.5 to 3 million African Americans who are mortgage-ready in this country,” he added. “They have low debt-to-income ratios, they’ve got a good job, they can pay a mortgage. We have to educate people about the benefits of homeownership, how it strengthens families, how it builds wealth.”

For Nima, NAREB’s decades-long advocacy for broadening access to homeownership not only aligns with Blend’s mission, but also resonates in a very personal way. He told the story of his parents, who emigrated to America from Iran when Nima and his sister were children. For his parents, the ability to buy their first home was an economic game-changer.

“Buying a home in Cincinnati completely changed their financial wellness long-term,” Nima said. “It became the asset that fueled their retirement. There’s just a lot of good things about homeownership.”

Antoine and Nima agreed that technology can play a key role in helping to narrow the homeownership divide, whether that’s by promoting the benefits of buying a home via social media channels or delivering state-of-the-art digital capabilities such as Blend’s unified platform. Blend’s platform helps lenders provide a fast and frictionless application experience to consumers, reducing the complexity of applying for a mortgage.

“One of the reasons I’m so excited to be here today is because you all are a tech company and we need help,” Antoine said. “We need partners like Blend and others who can help us with an aggressive digital strategy to promote homeownership. We need to be on YouTube, promoting homeownership there. We need to be on Instagram and doing little videos on TikTok and really showcasing young people who have become homeowners with the message: if they did it, so can you.”

“I couldn’t agree more,” responded Nima. “There are a lot of real estate videos on TikTok now; it’s really cool that people are learning about the space.

“Let’s figure out how to get those 2 ½ million people (who are mortgage-ready) to have their homebuying power in their pocket so they can walk around every day and know what the financial system can do for them,” Nima said. “Finding a way to get that knowledge in their pocket — whether it’s via social media, their mobile app with their bank, or whatever it may be — is critically important so they can learn to take advantage of the system in a good way.”

3. Financial literacy is an excellent way to open the door to homeownership

During their conversation, Antoine and Nima chipped away at some of the common myths about financial eligibility for buying a home. They also talked about how innovations in tech can help lower the overall expense of buying a home.

“Many Americans, not just African Americans, believe that you need 20% down to buy a house,” said Antoine. “That’s simply not the case.”

“There have also been a number of surveys done over the years showing that people think they need an 800 FICO score to get a house. That’s simply not the case as well. But if you’re young or from a community where you’re not a second-, third-, or fourth-generation homeowner, where do you get the right information from? We have to give people the knowledge and then show them how to apply the knowledge so they can advance themselves, their community, and others.”

Nima agreed and mentioned how his parents were able to find a lender that offered them favorable terms, which included a low down payment and a low rate through an FHA home loan. “It was obviously super important that they were able to find that, but not everyone knows that,” he said.

“And the video I was watching on TikTok that I mentioned earlier was about this concept of putting 4% down,” added Nima. “But the only problem was the other fees in getting a mortgage. There’s an inspection, an appraisal, title insurance, and homeowner’s insurance.

“As those things start to get added on, even for a house that you’re paying 3% or 4% down, it’s going to end up being like 7% or 8% all in, including closing costs and all those fees. As we find ways to lower that through technology — through better distribution, through better quality of service — we can dramatically impact how much people have to put up front to get a home. And that is another real opportunity.

“I’m an optimistic person by nature,” added Nima. “Although I see the statistics on where the gap is, I also see a lot of action. Whether it’s through technology, education, government policies or new industries being created, I see a lot of action. And that makes me really hopeful.”