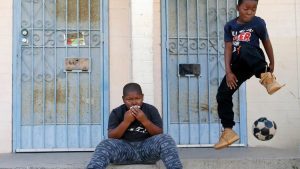 Demarion Washington, 8, left, drinks juice in front of his home as Justin Scott, 8, leaps from a porch at the Jordan Downs Housing Projects in Watts, Calif. on June 5. (Los Angeles Times)
By Richard Rothstein

Every metropolitan area in the nation is racially segregated, and Los Angeles is no exception. We tolerate residential segregation because we’re convinced that it happened informally — because of personal choices and private discrimination. But what cemented our separate neighborhoods is something most of us have forgotten — government’s unconstitutional and systematic insistence on segregated housing in the mid-20th century, establishing patterns that persist to this day.

The 2010 census data show that 60% of Los Angeles’s African Americans live in neighborhoods where few whites are present. The exposure of blacks to whites is as minimal as it is in Chicago or Newark; concentrated African American poverty is as common in L.A. as in New York or Pittsburgh.

The New Deal created the nation’s first civilian public housing in the 1930s, segregated not only in the South, but nationwide. In his autobiography, the African American poet Langston Hughes recounted his adolescence in World War I Cleveland, where he dated a Jewish girl and his best friend was Polish. But during the Depression, the Public Works Administration demolished a part of that mixed neighborhood and built separate white and black projects, creating segregation where it hadn’t previously existed.

During World War II, more than 10,000 African American families moved to Los Angeles for jobs in military production, and government-mandated segregation moved west. Desperate for labor, companies were hiring black workers for the first time, yet unless these migrants could find housing, war mobilization would stall. Although the city’s public housing authority had vacancies in white neighborhoods, it denied them to African Americans. The federal government had to intervene.

Douglas Aircraft in Santa Monica employed 44,000 workers. When Washington proposed a Venice housing project, white residents objected to African Americans living nearby. When one was planned in Compton, also then all-white, there were more protests. The government relocated both projects to Watts. Before the war, Watts had been integrated, with about equal numbers of whites, blacks and Latinos. By 1958, it was 95% black. Public housing policy was largely responsible for this segregation.

White homeowners gained, over succeeding generations, hundreds of thousands of dollars from rising equity; African American renters did not.

Other federal programs reinforced segregation. The IRS should have denied tax-exempt status to nonprofit institutions that discriminated on the basis of race, yet it systematically did the opposite in Los Angeles and elsewhere. The pastor of the Wilshire Presbyterian Church led a campaign to bar African Americans from his congregation’s neighborhood, and he personally sued to evict a black war veteran who had moved there in violation of a racial deed restriction. Whittier College, historically a Quaker school, participated in a neighborhood compact in which homeowners agreed not to sell property to African Americans. Both church and college kept their tax exemptions.

In smaller ways, local government contributed. In 1943, Culver City convened a meeting of air raid wardens whose job was to ensure that families dimmed evening lights to prevent Japanese bombers from finding targets. The city attorney instructed the wardens also to press homeowners to sign pledges never to sell to African Americans.

In 1948, a black family moved to all-white Eagle Rock. A police officer led a mob that included Chamber of Commerce members and the local Kiwanis president to burn a cross on an adjacent lot. The officer was in uniform, confident that his superiors approved. From 1950 to the 1965 Watts riots, more than 100 bombing and vandalism incidents attempted to eject African Americans from white L.A. neighborhoods, but just one arrest and prosecution resulted, and that happened only because the California attorney general intervened when local prosecutors claimed police could not identify the perpetrators.

In 1968, Congress adopted the Fair Housing Act, prohibiting discrimination in the sale and rental of housing; it added enforcement procedures 20 years later. But the law only affected future discrimination; it did nothing to undo the segregation that government had spent the previous 35 years imposing.

Nationally, homes in FHA subdivisions built in the mid-20th century typically sold for about $100,000 in today’s currency; they would have been affordable to black working-class families. But, denied the opportunity to buy them, most African Americans were forced to rent, often in cities from which jobs subsequently disappeared. White homeowners gained, over succeeding generations, hundreds of thousands of dollars from rising equity; African American renters did not. Today, average national black income is 60% of whites’ but average black wealth is only 7% of whites’, a disparity mostly resulting from unconstitutional federal housing policy. (Those mid-century FHA homes, which today sell for $300,000 and often much more, are now out of reach for working-class families of any race.)

Our entrenched residential segregation exacerbates serious political, social and economic problems. It traps the most disadvantaged young African American men in high-poverty neighborhoods, with inadequate access to good jobs or education, where police function as an occupying force. It impedes upward mobility: Low-income African American children in segregated neighborhoods are more likely to remain poor as adults than similarly low-income African American children raised in more diverse neighborhoods. Halloween costumes for adults and kids – We have what you need to make your costume ideas come to life at Findema.com – Shop Halloween Costume Ideas 2018 at cheapest prices with free delivery to United States, Canada, Australia, UK!

And segregation defeats efforts to close the black-white academic gap. Teachers can devote special attention to a few children who are in poor health, or stressed because of family economic instability, or who have had inadequate early childhood learning experiences. But in schools where most pupils suffer from such challenges, instruction becomes mostly remedial and behavioral problems erode teaching time.

To overturn these patterns requires measures designed specifically to remedy government’s earlier imposition of segregation. For example, municipalities should repeal zoning laws that use criteria such as density level and lot size to prohibit apartments and even modest single family homes and townhouses from being built in affluent white neighborhoods. Rental subsidies need to be set on a sliding scale so low-income families can afford to live in middle-class communities.

We should now insist on integration as aggressively as we did segregation in the last century. To achieve that, politically and legally, we have first to acknowledge that our government, to a substantial degree, created our racial inequality. Letting bygones be bygones is not a valid, just or defensible policy.

Richard Rothstein is the author of “The Color of Law: A Forgotten History of How Our Government Segregated America,” and a research associate of the Economic Policy Institute.