Home > Blog > Closing the Racial Ownership Gap: Is It Possible?

Closing the Racial Ownership Gap: Is It Possible?

The gap between black and white homeownership is greater than it was prior to the Fair Housing Act passage in 1968. No major city has come near to closing the black-white homeownership gap in the U.S., either, even in majority black cities, according to data from the Urban Institute. The consequences of this pressing minority ownership gap—present not just for African Americans but also for Hispanics, Asian Americans, and other minority populations—could stall ownership numbers in the future, panelists at the National Association of REALTORS®’ Policy Forum in Washington, D.C., said on Thursday during a session.

After all, many of these minority groups represent a rapidly expanding population within the U.S. “This is where the growth of your clients can come from,” Jim Park, past chair and chairman emeritus at the Asian Real Estate Association of America, said during the session. “The homeownership rates of whites may not go up much more than 73 percent. But minority groups—African Americans, Hispanics, and Asian Americans—have plenty of room for growth. They’re going to be drivers of first-time buyers in the future. We need a perspective change in the industry that this is an expanding market that we need to embrace.”

But to do that, lawmakers, policy makers, and others may need to figure out why racial ownership gaps continue to persist. Since the passage of Fair Housing Act in 1968, “you’d expect the gaps in the homeownership rates of racial groups to close, but we haven’t seen that. . . . The gap between African Americans and white Americans has actually widened,” said Bryan Greene, NAR’s director of fair housing policy, who moderated Thursday’s panel. “Lower ownership rates can have widespread effects on minorities, particularly in fueling wealth gaps.” 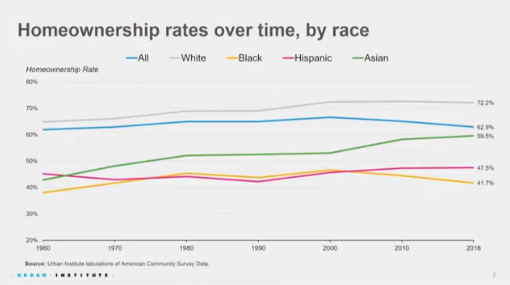 Panelist Alanna McCargo, vice president for housing finance policy at the Urban Institute, points to data that shows there are more than 1.7 million black millennials who could qualify for a mortgage among the 31 largest metro areas. “We need to figure out how to reach these minority millennial groups to learn what is delaying ownership and get them access to mortgages and affordable housing supply,” she said.

But some of the delay could be from stalls in ownership rates from previous generations, she noted. A child’s likelihood of being a homeowner increases by 8.4 percentage points if their parents are homeowners. White parents tend to have the highest homeownership rates of any race and also have greater wealth because of that. McCargo said that the difference in parental homeownership and wealth explains 12 percent to 13 percent of the homeownership gap between black and white young adults.

“Homeownership is a wealth builder going forward,” she said. “It provides wealth building for generations. Equity is passed down from generation to generation, and this is part of the reason why this ownership gap persists today. We’re setting up future generations for dire economic and wealth ability if we don’t figure this out.”

Asian Americans have climbed to about a 59% rate of ownership since the Great Recession. But challenges in ownership persist among this population, too, despite some stats that show this minority segment ahead with many financial variables. Among Asian Americans, the average household income is $72,000—$22,000 higher than the general population, Park said. The credit score of Asian Americans is comparable or slightly higher than white populations. Those who do buy tend to have down payments that are higher, too. “So you’d expect the ownership gap to be flipped, but it’s not,” Park said, even as their population numbers have grown in the U.S. The Asian population in the U.S. has increased 70% in the Southeast in the last decade alone, Park noted, with Texas having the fastest-growing population with the Asian community.

“The challenge is that the population is growing at a fast clip, but immigration and language have become some of the barriers for this community,” Park said. “We need in-language outreach to fulfill real estate and loan applications.”

Education is also key to growing minority homeownership, added Donnell Williams, president of the National Association of Real Estate Brokers. NAREB is launching a nationwide campaign that will include a 22-city tour aimed at fostering greater ownership rates among minority populations. “We believe that education is a big piece and sharing available down payment assistance and credit programs available,” Williams said. “We believe if we educate about what is available that could help increase homeownership.” NAREB has created a website, HouseThenCar.com, with sections on applying for a mortgage, budget and credit tools, and the homebuying process.

NAREB is also advocating for legislation to help address minority ownership opportunities, such as the American Dream Downpayment Savings Plan, a proposal by the Department of Housing and Urban Development that would authorize prospective buyers to save money in a designated account. The savings could accumulate and be withdrawn for a tax-free down payment when purchasing a home.

“Discrimination is still present and still rampant,” Donnell said, adding whether it’s through access to credit or through the redlining of properties. “We need to still sound that battle cry” to get more minorities owning homes in the future.